Overnight
Mostly cloudy, with a low around 18. North wind 6 to 8 mph.
Tuesday
A 20 percent chance of snow showers after noon. Cloudy, with a high near 30. Light and variable wind becoming south southeast 5 to 7 mph in the afternoon.
Tuesday Night
A slight chance of snow showers before 8pm, then a chance of flurries between 8pm and midnight. Cloudy, then gradually becoming partly cloudy, with a low around 23. Southeast wind 5 to 8 mph becoming south southwest after midnight. Chance of precipitation is 20%.
Weather forecast provided by weather.gov.
Search 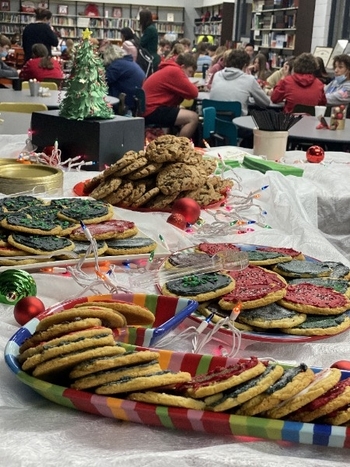 Cocoa Corner returned to the NHS library on Thursday, December 2. Cocoa Corner was first introduced by then District Librarian Ruth Shasteen in 2003. Under the leadership of Mr. James, Mrs. Henderson, and Mr. Davis, students were treated to live music performances by staff and students, along with karaoke, which was a huge hit. During Intervention period a Christmas Trivia contest was also held. Hot cocoa and cookies were available throughout the day. Many thanks to Angie and kitchen staff for baking cookies and to staff who donated decorations, coca, and coca toppings. The Christmas spirit was alive and well in the Library!